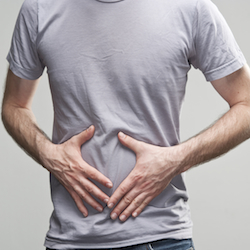 While diet is often to blame for diverticular disease, this new study shows the cause may be all in one’s genes. More than half of adults in the Western Hemisphere over the age of 40 have diverticula, small bulging pouches inside their intestine. They are caused by weakening of the outer lining of the intestine and are typically harmless. However, for some, these pouches can lead to diverticulitis and become painfully inflamed or infected, requiring treatment with antibiotics — or, in serious cases, surgery to remove the colon. The problem leads to as many as 200,000 hospital admissions each year in the United States.

The cause of both diverticulosis and diverticulitis has remained elusive, but most chalked it up to low-fiber diets. Lillias Maguire, M.D., a colorectal surgeon at Michigan Medicine, wasn’t satisfied with typical explanations for the common inflammatory disease.

“The prevailing suspicion was that it is caused by diet. It’s been thought that diverticulitis might be linked to low fiber, since people consuming a typical Western diet are relatively constipated. However, when you look more closely, this explanation doesn’t appear to shake out.” ~ Lillias Maguire MD

Studies have shown that diverticulitis tends to be inherited, says Maguire, with identical twins showing more similarity in their likelihood to develop the disease than fraternal twins. This points to a probable genetic component.

To find out more, she approached Elizabeth Speliotes, M.D., Ph.D., an assistant professor of gastroenterology, internal medicine, and computational medicine and bioinformatics who has been heavily involved with genetic studies of multiple different disease states. Speliotes mentored Maguire through a genome-wide association study to hunt for genes underlying the condition. The study is published in the journal Nature Genetics.

Maguire used a collection of data from the UK Biobank, which contains the genetic and medical information of more than 500,000 people between the ages of 40 and 69 years old. In this instance, the data had potential. “Through medical records, we know that about 28,000 people in the UK Biobank were admitted for diverticulitis,” Maguire says.

With help from Speliotes’ lab, she compared those people with a cohort of about 31,000 people from the Michigan Genomics Initiative at U-M. The goal: to find common genetic variants that might identify the potential genes behind the disease.

“In a GWAS (genome-wide association studies), we are looking for variants in the genomes unique to individuals that are associated with genes,” Maguire says. “They don’t necessarily pinpoint genetic mutations, but they point us to a region in the genome that has multiple genes nearby.”

Using the UK Biobank sample, researchers found 42 locations that were associated with 99 genes of interest. They credit the large sample of people to helping identify so many locations.

“We then run a massive statistical test to see which variants come out as strongly associated with diverticulitis,” Maguire says. But that doesn’t mean all 42 are necessarily significant. The sheer size of the sample means some loci are bound to be just noise, she adds.

When they compared the 42 loci from the UK Biobank with the Michigan Genomics Initiative sample, eight came out as common between the two groups. “When we see replication of loci across populations, it makes us feel more secure that there is a strong correlation,” Maguire says.

The research showed that genes in these associated regions were significantly enriched for expression in mesenchymal stem cells and multiple connective tissue cell types and are co-expressed with genes that have a role in vascular and mesenchymal biology. Genes in these associated loci have roles in immunity, extracellular matrix biology, cell adhesion, membrane transport and intestinal motility. Phenome-wide association analysis of the 42 variants shows a common etiology of diverticular disease with obesity and hernia.

The analysis offers new and useful insight on diverticulitis. Thirty-nine of the loci Maguire’s team found have never before been identified. Maguire believes they have the potential to serve as a starting point for finally explaining the origins of this disease.

“Maybe by investigating some of our targets, we might have an answer about why this disease occurs and develop a drug or therapy that works a lot better than just taking out a piece of the colon or giving people recurrent courses of antibiotics,” ~ Lillias Maguire MD

None of these discoveries, the researchers know, would be possible without biobanks. “The people who had the foresight to set up and participate in the Michigan Genomics Initiative have provided and are growing this amazing resource that will enable us to do a lot more studies to really understand what is happening to people — not just with diverticulitis but with other diseases,” she says. “This is just the start.”