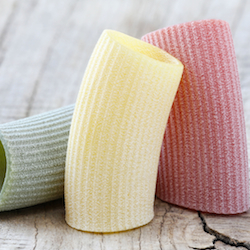 News
Celiac disease affects an estimated 1 in 133 Americans, or about 1% of the population, has celiac disease. As many as 83% of Americans who have celiac disease are undiagnosed or misdiagnosed with other conditions. On average, most people wait 6-10 years to be correctly diagnosed, according to Daniel Leffler, MD, MS, The Celiac Center at Beth Israel Deaconness Medical Center. One of the reasons for the delay in diagnosis is the need for an invasive small-bowel biopsy. A study in the Feb. 2014 issue of  the journal, Clinical & Experimental Immunology, features research findings demonstrating that a simple blood test may eventually be used for diagnosing celiac disease and monitoring new therapies.
The study was led by Bob Anderson, M.D., Ph.D. (the chief scientific officer ImmusanT, developers of the test) and colleagues in Australia. The company says the new blood test could provide an approach that could lead to more rapid and accurate diagnosis of celiac disease, as well as help address an emerging medical problem of inconclusive or self-diagnosed celiac disease in people following a gluten-free diet who may not have the disease. “This novel diagnostic method for celiac disease required study participants to include gluten in their diets for a mere three days, a stark contrast to the weeks or months of gluten consumption required for a diagnosis using the current standard, bowel biopsy,” said Anderson.
All study participants, including control patients who did not have celiac disease, ate gluten within three days of taking the blood test. Using the new test, the researchers detected the T cells responsible for celiac disease in 85 percent of the study participants previously known to have the disease. The test was negative in all of the patients on a gluten-free diet who thought gluten was the cause of their digestive symptoms but did not have celiac disease. “There is significant need for highly specific, noninvasive and easy-to-use diagnostic tools for celiac disease,” said Leslie Williams, president and chief executive officer of ImmusanT. See the slideshow for the study results.
.
Previous Article
Next Article