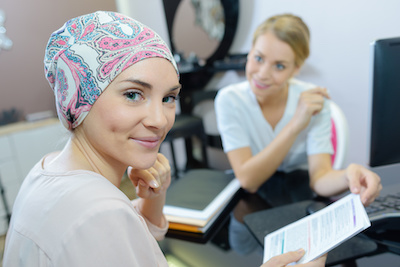 Clinical studies suggest hydrogen may improve side effects of radiation and chemotherapy as clinicians work to reduce cancer treatment side effects.

One area in which all medical providers exercise a great level of caution with dietary supplement use is in individuals undergoing treatment for malignancy. As both radiation and chemotherapy are therapeutic in the setting of cancer because of the damage and cellular death that they are intended to impart to cancerous cells, we must exert extreme care that these effects are not mitigated. Hence, most healthcare providers prefer to err on the side of caution and either cease supplemental therapies or refer out to an integrative oncology-focused provider when patients are undergoing these types of treatments.

That said, there are some supplements with clinical evidence supporting their concurrent use in patients receiving radiation or chemotherapy. Several studies have investigated the use of high doses of melatonin as an adjunctive therapy for patients undergoing conventional cancer treatments, [1,2,3] and a growing volume of research suggests melatonin may actually improve the response to chemotherapy and radiation treatment whilst mitigating many of their adverse effects. [4,5,6] The mushroom product active hexose correlated compound (AHCC) also has been shown in multiple clinical studies to improve quality of life measures and reduce the adverse effects of chemotherapy. [7,8,9] In recent years, molecular hydrogen (H2) also has been added to this list. As a newer nutraceutical, it is valuable to read first on the mechanisms by which this molecule exerts its therapeutic action, covered in brief here as they pertain to cancer treatments.

A significant amount of the damage and cellular death associated with radiation is caused by the hydroxyl radicals (•OH) that ionizing radiation generates.[10] The •OH radical indiscriminately damages cellular membranes, proteins, and DNA, and has been estimated to cause 60 to 70% of the cellular damage associated with radiation treatment.[11] Although this damage is necessary to kill rapidly multiplying and growing malignant cells, the secondary effects it has on healthy cells in the body can be mitigated in part by a higher cellular antioxidant status, which many natural substances enhance.[12,13] Much of the damage to nontargeted tissues seen with chemotherapy also is due to treatment-related increases in oxidative species including •OH, hydrogen peroxide (H2O2), and peroxynitrite (ONOO-), as well as an increase in proinflammatory cytokines like tumor necrosis factor (TNF)-α.[14] It is not uncommon that therapies such as these must be discontinued or occur at a lower frequency or dose than what is optimal for treatment due to the severity of side effects caused by the damage to healthy, noncancerous tissues.

H2 is well-established to be an excellent •OH and ONOO- radical scavenger, [15] while its effects on other oxidants that are biologically important like nitric oxide (NO) and H2O2 are limited to reducing excessive production.[16] H2 also decreases levels of proinflammatory cytokines generated in response to experimental stressors (commonly caused by lipopolysaccharide stimulation or ischemia/reperfusion injury), including interleukin (IL)-6, IL-1β, and tumor necrosis factor alpha TNF-α [17,18,19,20] Thus, it should not be surprising that several studies have investigated H2 as an agent for mitigating the adverse effects of radiation and chemotherapy.

Pretreatment with H2 prior to radiation exposure has been shown to decrease the damaging effects radiation has on lymphocytes, enterocytes, cardiomyocytes, and germ cells, [21, 22, 23] potentially protecting against immune, gastrointestinal, cardiovascular, and reproductive problems commonly associated with this type of treatment. Interestingly, in one of these studies, it was shown that if the treatment with H2 was provided only after radiation, the protective effect was not significant.[22]

In animals being treated with cisplatin, concurrent treatment with H2-rich saline was shown to help reduce ovarian damage and improve the development of follicles. [24] H2 has also been shown to protect the kidneys against the damaging effects of cisplatin without adversely affecting the antitumor effects of the medication.[25,26] An additional study with cisplatin found that H2 decreased damage to the hair cells of the ear and hearing loss associated with this therapy, partly mediated by a reduction in oxidative stress.[27]

Studies have shown that H2 may have anticancer effects as well. In 1975, research suggesting this was published in the journal Science, with it being shown that hyperbaric H2 treatment led to substantial regression of squamous cell carcinoma.[28] In animals, treatment with H2 via inhalation therapy suppressed glioblastoma growth, while in the parallel in vitro study, it was shown to reduce the migration, invasion, and colony-forming ability of glioma cells.[29] Additional in vitro studies have shown H2 inhibits cancer cell proliferation, migration, invasion, and colony formation and also induces cancer cell apoptosis. [30,31,32,33] In vivo, treatment with H2 has been shown to decrease carcinogenesis in settings of radiation exposure,[34] nonalcoholic steatohepatitis,[35] and toxin exposure,[36] and reduce cancer progression and angiogenesis.[31,32] In combination with 5-fluorouracil, the addition of high H2 water improved the anticancer effects of the drug both in vitro and in vivo.[37]

Clinically, H2 has been studied as an adjunctive therapy for individuals undergoing radiation treatment for hepatic malignancy. In this randomized, double-blind, placebo-controlled trial, individuals receiving radiotherapy for hepatocellular carcinoma or hepatic metastasis were provided with four 500 mL bottles of H2-rich water or placebo water and instructed to drink it daily for six weeks, starting on the first day of their radiation treatment.[38] Participants were told to drink 200 to 300 mL of the water in the morning, and 100 to 200 mL every few hours throughout the day. Quality of life (QOL) scores were assessed weekly using the European Organisation for Research and Treatment of Cancer’s QLQ-C30 questionnaire, which evaluates numerous areas of function that can be affected by malignancy and its treatment, including cognitive, emotional, and physical health.[39] Antioxidant power and reactive oxidant metabolite levels in the blood were assessed on day one (before the radiation treatment and intervention began) and again after six weeks.

From week one and through the study, QOL scores were significantly better in patients receiving H2-rich water compared to placebo. The individuals consuming H2 water also had significantly less appetite loss and tasting disorders. Changes in both oxidative stress and antioxidant levels were prevented by consumption of H2 water, while both markers were significantly worsened by radiation treatment in the group receiving placebo water. Other markers (liver function, red and white blood cell counts, platelet counts, and cholesterol) did not change significantly in either group. The tumor response to radiation treatment was not found to be compromised by consumption of the H2-rich water.

H2 also has been studied as an adjunctive therapy for individuals receiving mFOLFOX6, a combination chemotherapy consisting of 5-FU, oxaliplatin and calcium folinate.[40] Liver injury is common with this medication, and typically manifests as a rise in aspartate transaminase (AST), alanine transaminase (ALT), and bilirubin elevation.[41] In this randomized, single-blind, placebo-controlled study, patients receiving mFOLFOX6 for the treatment of colorectal cancer (Stage ≥IIB after surgery or inoperable) were provided with 1 L of H2-rich water (containing H2 at a level of 0.27 to 0.4 ppm) or placebo water to drink daily, in divided doses. The water consumption was initiated the day before the chemotherapy and continued a total of four days through it. On the tenth day after beginning chemotherapy liver function tests were performed. It was found that the patients consuming H2-enriched water had a significantly lower probability and degree of hepatic damage than the placebo group. In the H2 group, there was no statistically significant differences in the levels of AST, ALT, bilirubin (direct and indirect), or alkaline phosphatase. However, the placebo group experienced a significant increase in AST, ALT, and indirect bilirubin levels following chemotherapy. No other markers or symptoms were assessed in this study, and there was not a report of the outcomes of the chemotherapy treatment.

Although we are at an early stage in the research surrounding H2 as an adjunctive therapy for cancer treatment, the outcomes of both clinical studies are promising, and reinforce the findings of cellular and animal studies. Although longer and larger studies are necessary, given the positive findings, H2 is worthy of consideration on a case-by-case basis for use in this population or in those seeking to reduce the risk of malignancy.