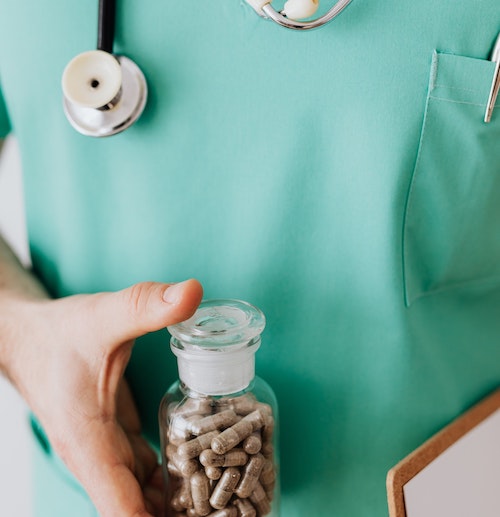 A look at the physiological role of melatonin beyond its sleep-supportive and antioxidant effects.

Melatonin has been shown to improve various markers of lung function and/or reduce pulmonary inflammation in numerous settings not having a primary infectious etiology. Although we typically think of melatonin as a regulator of the circadian rhythm and our most primitive protective antioxidant,[1],[2] the role it plays in the body is far more encompassing than this. In addition to regulating the sleep cycle, melatonin impacts reproductive function,[3] physical growth,[4] bone formation,[5] brain health,[6] metabolism,[7],[8] oral health,[9] and of greatest relevance to the discussion here, our immune system function.[10]

Much like other key hormones and signaling molecules, melatonin has multiple receptors that are found in nearly every system of the body including the cells of the immune system.[11],[12] Although melatonin is primarily produced by the pineal gland, research suggests it is also produced in the bone marrow,[13] thymus,[14] lymphocytes,[15],[16] and various cells of the gastrointestinal tract – each of which influence immune function.[17],[18]

Well-established by numerous studies are the declining levels and altered rhythms of melatonin with increasing age.[19],[20] Age-related decreases in melatonin as well as other critical antioxidants including CoQ10 and glutathione are factors leading to the declining function of our cells, organs, and systems overall, and contribute to numerous diseases we see with increasing age.[21],[22],[23] Although each of these antioxidants are important for normal healthy immune function,[24],[25],[26] melatonin comes to the forefront as a critical factor that affects our susceptibility and response to infections.

Herein, we step through the mechanisms by which melatonin may impact immune function and inflammation, while in Part 2 we take a look at its impact on respiratory health in general and its anti-infective effects.

The Circadian Rhythm and the Immune Response

Melatonin is one of many hormones that have a circadian variation in the human body. Opposite to it, cortisol and dehydroepiandrosterone (DHEA) oscillate cyclically in a 24-hour period.[27],[28] Although we tend to think of these three hormones the most when it comes to the day-to-day cyclic variation, nearly every hormone in the body varies diurnally,[29] with each of them influencing each other as well.

Levels of nearly all immunocyte populations and their related cytokines have a circadian variation, influenced by sleep.[30] Nocturnal sleep is associated with an acute lowering of monocytes, natural killer cells, and all lymphocyte subsets, followed by a rebound to daytime levels the following afternoon and evening.[31] When the normal nocturnal sleep period is absent, both the dip and rise of many of these lymphocytes is attenuated. Pro-inflammatory cytokines and undifferentiated naïve T cells peak during early nocturnal sleep while levels of anti-inflammatory cytokines and cytotoxic natural killer cells peak during daytime wakefulness.[32] Prolonged sleep disruption has been established by several human studies to promote a pro-inflammatory state.[33],[34],[35]

Melatonin influences the circadian variation of the immune response and levels of inflammatory mediators.[36],[37],[38] Conversely, inflammatory cytokines such as tumor necrosis factor (TNF)‐α influence nocturnal melatonin production as well.[39],[40] In severe illness such as sepsis, melatonin secretion is impaired,[41] while in other critical care settings, it often is dysregulated.[42],[43] Certain viral infections have also been shown to disrupt the circadian rhythm, which can additionally lead to increased viral replication.[44],[45] Animal studies have shown melatonin supplementation helps attenuate the proinflammatory effects of sleep deprivation and inflammatory response to triggers such as lipopolysaccharide (LPS), also reducing immunocyte infiltration and tissue damage in the lungs.[46],[47]

Studies suggest that sleep and/or melatonin administration enhances interactions between antigen-presenting cells and T helper cells,[48] promoting immunological memory much like it does for neurobehavioral memory.[49] Melatonin also has been observed to increase natural killer cell production and activity as well as antibody-dependent cellular cytotoxicity.[50],[51],[52] Melatonin not only opposes the wakefulness actions of cortisol, it also antagonizes its immunosuppressive effects.[53]

One mechanism by which melatonin may attenuate the severity of inflammation is through inhibition of the NLRP3 inflammasome. Activation of the NLRP3 inflammasome contributes to the pathology in numerous conditions associated with chronic, low-grade inflammation[54] including type 2 diabetes,[55] non-alcoholic steatohepatitis,[56] and Alzheimer’s disease;[57] each of which melatonin has been shown to help protect against.[58],[59],[60],[61] Although some level of NLRP3 activation is important for the normal, protective response to microbial invaders,[62] it also can be a mediator of excessive inflammation and the pathology that ensues.[63],[64]

Animal models of atherosclerosis,[65] subarachnoid hemorrhage,[66] osteoporosis,[67] diabetic cardiomyopathy,[68] radiation injury,[69] and more[70] show melatonin has protective effects via inhibition of NLRP3 inflammasome activation. Melatonin has also been shown in multiple studies to have anti-inflammatory effects by increasing levels of interleukin (IL)-10 and reducing TNF-α.[71],[72],[73] Cellular studies with human blood samples found that treatment with melatonin (at levels similar to what can be achieved physiologically) attenuated the mitochondrial dysfunction, oxidative stress, and cytokine response to LPS.[74] Melatonin also helps reduce the body’s overproduction of nitric oxide (NO).[75] Although NO helps mediate the body’s antiviral response, it also contributes to infection-related pathology.[76]

Multiple human studies have shown that in conditions associated with chronic inflammation such as type 2 diabetes, periodontitis, and multiple sclerosis, melatonin reduces levels of CRP and/or various pro-inflammatory cytokines.[77],[78],[79],[80] Acute application of melatonin as a therapy at doses ranging from three to 20 mg/day also has been shown to reduce markers of inflammation in surgical settings.[81],[82],[83] Results from a 2019 meta-analysis of randomized controlled trials also validates melatonin as an anti-inflammatory therapy, finding that supplementation with three to 25 mg of melatonin for four weeks or more significantly decreased TNF-α and IL-6 levels.[84]

For More See Part 2 on Melatonin and Respiratory Health

[60] Vincent B. Protective roles of melatonin against the amyloid-dependent development of Alzheimer’s disease: A critical review. Pharmacol Res. 2018 Aug;134:223-237.

[82] Zhao Z, et al. The protective effect of melatonin on brain ischemia and reperfusion in rats and humans: In vivo assessment and a randomized controlled trial. J Pineal Res. 2018 Nov;65(4):e12521.