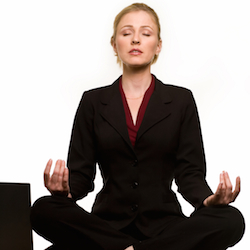 Context • With the current globalization of the world’s economy and demands for enhanced performance, stress is present universally. Life’s stressful events and daily stresses cause both deleterious and cumulative effects on the human body. The practice of meditation might offer a way to relieve that stress.

Objective • The research team intended to study the effects of meditation on stress-induced changes in physiological parameters, cognitive functions, intelligence, and emotional quotients.

Setting • The research team conducted the study in a lab setting at the All India Institute of Medical Sciences (AIIMS), New Delhi, India.
Participants • The participants were 34 healthy, male volunteers who were students.

Intervention • To study the effects of long-term medita- tion on stress levels, intelligence, emotional quotients, and cognitive functions participants meditated daily for 1 month, between phases 1 and 2. To study the immediate effects of meditation on stress levels, participants meditated for 15 minutes after playing a computer game to induce stress.

Outcome Measures • The research team measured galvanic skin response (GSR), heart rate (HR), and salivary cortisol and administered tests for the intelligence and emotional quotients (IQ and EQ), acute and perceived stress (AS and PS), and cognitive functions (ie, the Sternberg memory test [short-term memory] and the Stroop test [cognitive flexibility]). Using a pre–post study design, the team performed this testing (1) prior to the start of the study (baseline); (2) in phase 1, after induced stress; (3) in part 1 of phase 2, after 1 month of daily meditation, and (4) in part 2 of phase 2, after induced stress, both before and after 15 minutes of meditation. Results • Induced stress from the computer game resulted in a significant increase in physiological markers of stress such as GSR and HR. In the short term, meditation was associated with a physiological relaxation response (sig- nificant decrease in GSR) and an improvement in scores on the Stroop test of reaction times. In the long term, meditation brought significant improvements in IQ and scores for cognitive functions, whereas participants’ stress levels (GSR and AS) decreased. EQ, salivary cortisol, and HR showed no significant changes.