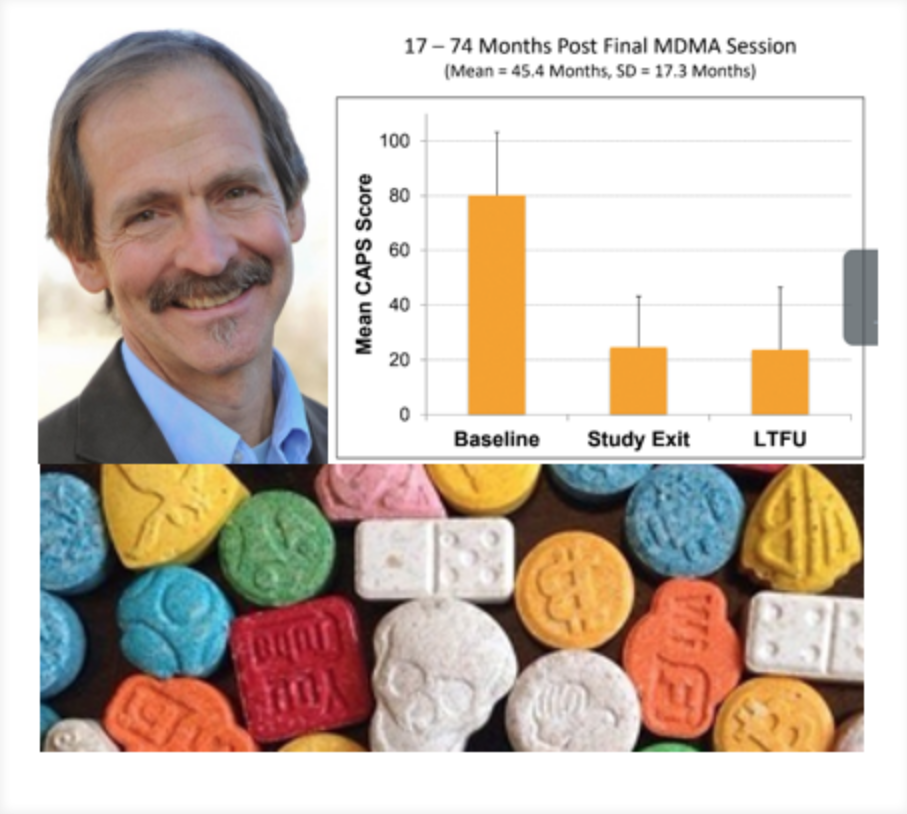 Author Michael Pollan’s powerful 2015 New Yorker essay “The Trip Treatment” suggested that a book was coming, as it did with last year’s best seller: How to Change Your Mind: What the New Science of Psychedelics Teaches Us About Consciousness, Dying, Addiction, Depression and Transcendence. Pollan’s essay also suggested that a companion book might be needed: How to Change the Psychotherapy Industry. Long-term value from 1-3 doses of these agents presents its challenges for both the manufacturers of competing pharmaceuticals and also for clinicians accustomed to banking on long-term treatment processes. So when I learned that integrative psychiatrist Scott Shannon, MD is part of the Phase III trial of MDMA – the pharmaceutical version of the street drug known as “Ecstasy” or “Molly” –  I reached him to learn more about this “medication-assisted psychotherapy” and the impact he anticipates MDMA will have on his field.

The short answer to the industry is watch-out! That said, in the initial medication-assisted psychotherapy model that the Phase III trial is examining, specially trained therapists or psychiatrists, at least, will continue to have a significant role.

The present research for which Shannon’s Colorado clinic is a site follows a Phase II trial of MDMA (methylenedioixymethamphetamine). That trial was so positive that in 2017 the FDA awarded a “Breakthrough Therapy” designation to it’s successor – formally the MDMA Assisted Psychotherapy for Severe PTSD Phase III Study.

This is a remarkable turn. In 1985 the Drug Enforcement Administration (DEA) sequestered MDMA behind the walls of a Schedule 1 designation for concern for harm to the public.

Shannon said that pooled data from the six Phase II trials demonstrated a 66% response rate at one year in over 100 subjects with severe PTSD. There were no serious adverse events. The paper’s authors concluded that “MDMA-assisted psychotherapy can be administered to PTSD patients without evidence of harm, and it may be useful in patients refractory to other treatments.”

Shannon, a founder of the Academy of Integrative Health and Medicine (AIHM) and past president of the American Holistic Medical Association, believes that PTSD is just the tip of where this agent may be valuable. His view is grounded in clinical use of MDMA with couples and individual therapy in the early 1980s before the DEA slammed the door on legal clinical use with its Schedule 1 designation.  As Shannon shares in a blog posting, his use then of MDMA with individuals and couples convinced him of “the power of this simple molecule to relieve emotional suffering and heal relationships.” So while the present trial is only on individuals with intractable PTSD, Shannon points to the breadth of potential applications:  “Trauma underlies much of our chronic and severe mental disorders.”

Shannon’s view of the potential value of MDMA and other psychoactive agents is both expansive and transformational. He and his co-authors of a chapter called “Beyond PTSD: Other Therapeutic Applications for MDMA” for a book that is in pre-publication begin this way: “We are witnessing a societal and professional shift in our orientation to the psyche, moving from a suppressive model to an evocative model of mental health.” The sees the use of agents like MDMA as key to opening this terrain. He speaks to MDMA’s potential impact on field: “It truly is a transformational agent that will change the face of mental health care as we know it.”

The long-term benefits found in the Phase II trial begin to suggest how disruptive to the psychoanalysis industry such an agent could eventually be. Note in particular the continued benefits over an average of nearly 4 years captured in the “Long-Term Follow Up” (LTFU). 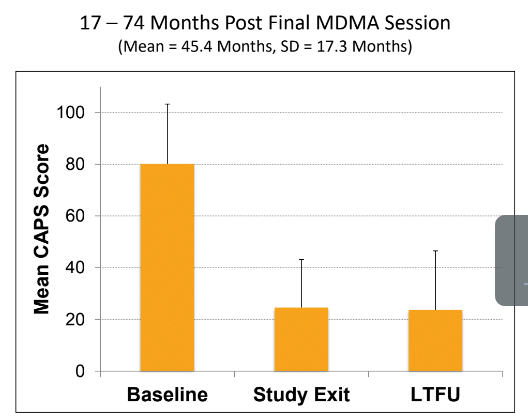 If these long-term benefits hold true in the present Phase III trial – and particularly if Shannon’s empirical experience in the early 1980s with MDMA for multiple other situations gain traction – sales forces for competing drugs are likely to read “LTFU” simply as “FU.”

The trial does not consist of merely sending the patient out of the office with a pill in hand. “Assisted psychotherapy” in this trial involves not one but two therapists or psychiatrists for the 8-hour treatment session: a male and a female. The intent is to provide maximum sense of safety. The patient reclines on a bed between the two professionals, with headphones and eye-shades. The approach is “inner-directed” says Shannon. The therapist’s goal is to support “the patient’s emerging, inner healing experience.” During treatment, patients alternate between their internal experience and exchanges with the therapists. “The drug seems to open access to trauma,” says Shannon. Research suggests that MDMA molecules “significantly enhance the communication between the amygdala fear center and the hippocampus in humans.” He believes that this may indicate the enhanced processing of fear memory and “allow processing of traumas and interpersonal fear with a sense of strength and clarity.”

The protocol under study, however, neither begins nor ends with a single experiential session. This supported inner process, 8-hour session follows three preparatory individual “integrative” psychotherapy visits of 90 minutes each at which both practitioners are present. This pattern is repeated three times in the MDMA trial. The final 8-hour session in the study design is followed by three more individual visits for a total of 12 visits with the therapist dyad. Each subject experiences over 45 hours of therapy in this model with 24 of those hours are medication assisted with the MDMA.

The protocol is not cheap.  Shannon estimates that the total cost of treatment for this method will be in the $10,000 to $18,000 range. If approved, one imagines further studies may experiment with dosage and other methods to cut costs. Are 3 experiential sessions needed? 12 therapy visits? Will the work need to be performed by two therapists psychiatrists?

Clearly, while significant disruption of the psychotherapy and psycho-pharmaceutical industries might be foreseen, it won’t be overnight.

Shannon’s view of the history of psychotherapy notes a tendency of the field to go overboard on each new method, whether Freudian psychoanalysis or electroshock therapy or, potentially, psychedelics. If MDMA and similar approaches gain rapid acceptance, might they too lead to overuse and harm? He responded: “I think we run the risk of over-medicalizing MDMA.  Medicine can suck the life out of things by over-medicalizing anything.”

Shannon’s excitement over the potentially transformational value of MDMA goes not to the economics but to the emergence in psychotherapy of an integrative philosophy relative to natural processes: “The underpinnings of integrative medicine and psychedelic medicine are the same. MDMA appears to be a catalyst for growth that releases the body’s ability to heal. The whole realm of the spirit has been plastered over by the approaches we have used. Spirit has been the step-child in the body-mind-spirit trilogy. These approaches can connect us to spirit.”