Transcendental Meditation May Reduce the Severity of PTSD Symptoms 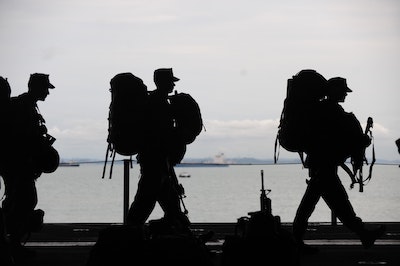 More than a third of patients with PTSD do not recover even after many years, showing PTSD to be a chronic and costly illness to service members, their families, and society as a whole. Traditional treatment of PTSD has not been uniformly successful because of comorbidities, side-effects of drug therapy, and time and energy needed for psychotherapy. Pharmacotherapy has shown insufficient benefit in the treatment of PTSD, while adherence and the treatment success of various psychotherapies has been disappointing. When patients with PTSD do not respond to traditional treatment, new approaches should be considered …  ~ Dr. Vernon Anthony Barnes, Augusta University.

Each treatment involved 12 90-minute sessions over 12 weeks, with daily home practice. The transcendental meditation and health education classes were given in group sessions while prolonged exposure therapy was delivered one-to-one. 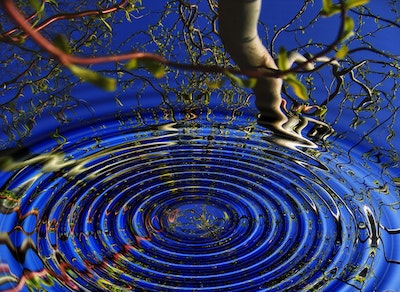 Current evidence-based treatments for PTSD include cognitive behavioral therapy, group therapy, medication and trauma-based psychotherapy, or a combination. After three months of treatment, the trial found meditation to be just as effective in reducing symptoms as prolonged exposure therapy (the most commonly used psychotherapy), and better than health education classes. Drop-out rates were not significantly different among the three groups

Most participants included in the trial had very severe PTSD symptoms, predominantly from combat-related trauma, with high rates of comorbid conditions. Importantly, more than two-thirds (68%) of the participants continued taking medication for PTSD during the trial.

Participants were included if their service-related traumatic event had happened three or more months prior to study enrollment, and they were not receiving other psychotherapy or meditation therapy for PTSD. Veterans with psychotic symptoms, mania, bipolar disorder, current suicidal or homicidal ideation, or cognitive impairment were not included in the study.

The Story of B.T. and TM

Veterans who participated in the study said that TM helped with sleep, stress and cleared their mind. One example is a B.T., 33-year old who was in the Marine Corps. eleven years ago. During his deployment to Iraq and Afghanistan, he had multiple engagements with enemy forces.

He explained: “I had friends that met their unfortunate end during their deployment. The repercussion of those experiences did not surface while I was in the Marine Corps. My mind was constantly occupied with the tasks at hand for me to realize those experiences had an adverse effect. Not until I got out of the Corps in 2014 and had time to decompress that it hit me like a brick.”

B.T. was diagnosed with depression and PTSD in 2014 at his local VA, just
after discharge from service. “I had problems going to sleep and staying asleep on a regular basis. My mind was clouded with regrets and uncertainties, on occasions I would think that I was better off dead so that I don’t have to deal with it. I had tried individual counseling with multiple psychiatrists to address the problems I experienced. They also (prescribed) different types of medications at the same time ranging from anti-depression to sleeping aid. The medications and counseling sessions did nothing for me but wasted my time.”

The medications had terrible side effects which was worse than dealing with my original problems. The counseling sessions I attended were not helpful because I was not the type of person to easily express my feelings and problems. However, I was committed to get help because I was tired of living like that and I was fortunate to be placed in the meditation program aiming at treating PTSD. I came in with an open mind and willing to try this new approach, which I think is the key for the success of this program. There were no side effects to meditation. I had nothing but good experiences with this method. ~ B.T., Marine Corps. Veteran

The Self Empowerment of Meditation Among Veterans

One of the benefits of TM is that it empowers veterans to manage their symptoms. “Consistent with military culture, transcendental meditation is self-administered, self-empowering, completely transportable, and inconspicuous. The technique can be practiced anywhere at any time, without specialized equipment or the need for personnel support. The US military has already included transcendental meditation as an adjunct to the PTSD recovery programe in some facilities,” says Dr. Barnes.

“PTSD is a serious and disabling condition, affecting an estimated 14% of US veterans deployed in or returning from combat in Afghanistan and Iraq,” says Dr Sanford Nidich, Maharishi University of Management Research Institute, USA. “PTSD harms veterans’ mental, physical, and financial wellbeing, and there is also growing evidence of links between PTSD and cardiovascular health, occupational functioning, metabolic function, and possibly even dementia risk. Our findings indicate the feasibility and efficacy of transcendental meditation as a potential therapy for veterans with PTSD and encourages future research to explore the durability of the benefits and applications to other populations with PTSD.”

One of the most commonly used treatments for PTSD is prolonged exposure psychotherapy, which focuses on re-experiencing the traumatic event through remembering and engaging with reminders of the trauma, as opposed to avoiding them.

While prolonged exposure psychotherapy is beneficial for many, 30-50% of veterans participating do not show clinically significant improvements, and drop-out rates can be high (ranging from 30-44%). Therefore, new treatments, including options not involving exposure to the traumatic experience, are needed for veterans who do not respond to treatment or drop-out due to discomfort.

Transcendental meditation is thought to lessen hypervigilance and an exaggerated startle response, as well as reducing anxiety, blood pressure, and being therapeutic in stressful situations. It has previously shown promising results against anxiety and PTSD symptoms in military veterans and active personnel, but the studies have been uncontrolled or with small numbers.

Another study participant, Ms. K., 32 years old, is a Navy veteran who was diagnosed with military sexual trauma. She explained: “Shortly after my Navy career I began to experience many difficulties in my well-being. It all began with an onset of paranoia and escalated to full blown PTSD. I would drink alcohol to excess to numb the pain of loneliness I felt from isolation. I was afraid to venture out of my house or drive or do anything that included interaction with people.”
During the first TM instructional session, Ms. K. reported that her practice
was “easy,” “peaceful” and “pleasant” and over the four-day course of instruction she experienced feeling “calmer.”

Through TM I began to trust, blossom, and most of all I began to heal. I began to come out of my nightmares and face the battle I had ahead. I began to attend the sessions faithfully, I began to drive, and I started community college. I got the courage to apply for a job in a hospital. This program has given me my life back. ~ Ms. K., Navy Veteran

The severity of the veterans’ PTSD symptoms were measured through an interview with the clinician (the Clinician-Administered PTSD Scale [CAPS] interview) at the start of the trial and after three months. 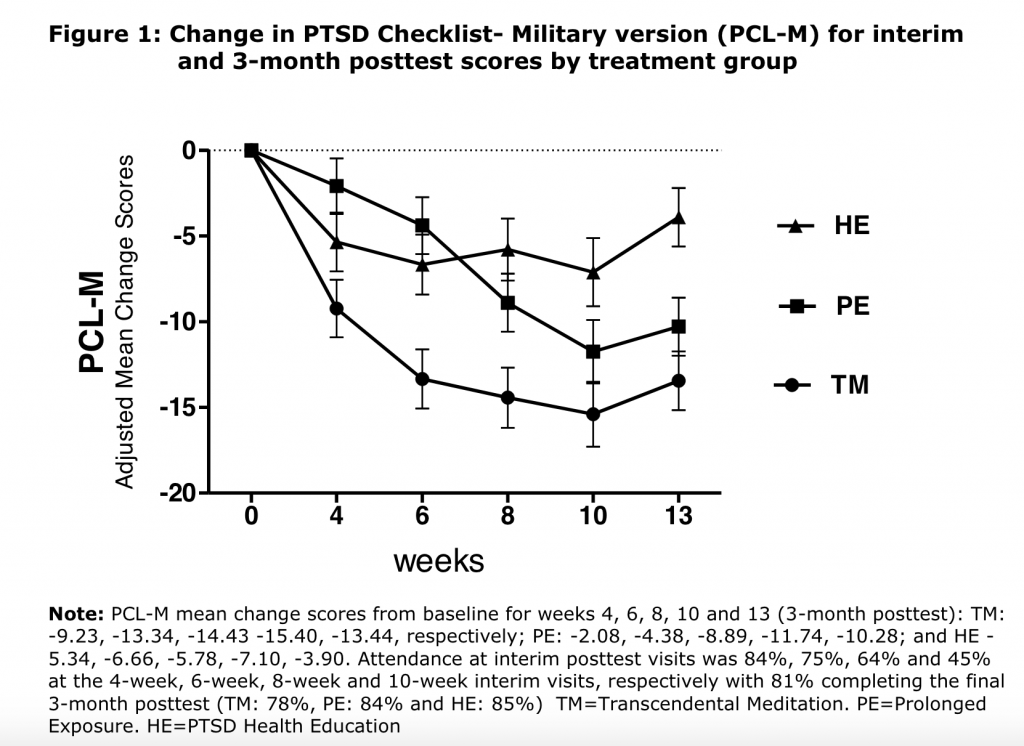 Conclusion/ Transcendental meditation was just as effective as prolonged exposure therapy, showing similar reductions in PTSD symptoms, and both of the therapies were more effective than health education classes.

At baseline, 68% of participants were taking at least one PTSD-related medication – 78% of participants in the transcendental meditation group, 66% receiving prolonged exposure therapy and 61% receiving health education classes. In statistical analysis controlling for medication use, the authors found that transcendental meditation still reduced PTSD symptoms compared to health education, and was just as effective as prolonged exposure therapy.

While fewer people in the transcendental meditation group exhibited treatment drop-out (attending less than eight sessions) than in the prolonged exposure therapy group (25% [17/68 people] vs 38% [26/68 people]), this difference was not statistically significant.

Our findings provide further evidence that PTSD treatments can be effective without an exposure component. Historically, the benefit of exposing people with PTSD to traumatic memories has been seen as an important part of the therapeutic process. However, evidence is increasingly supportive of non-exposure treatments also being beneficial. Because trauma exposure can be difficult for patients, similarly effective treatments that do not require exposure such as transcendental meditation could be appealing to veterans and other groups with PTSD,”  ~ Dr Nidich

The authors note some limitations, including that they were unable to recruit a substantial sample of women to enable comparisons by gender. In addition, the study did not include a follow-up period so long-term effects could not be evaluated.

This study was funded by the Department of Defense, US Army Medical Research. It was conducted by researchers from Maharishi University of Management Research Institute, VA San Diego Healthcare System, University of California, San Diego, and Georgetown University Medical School.

Click Here To Read More on Integrative Programs for Veterans