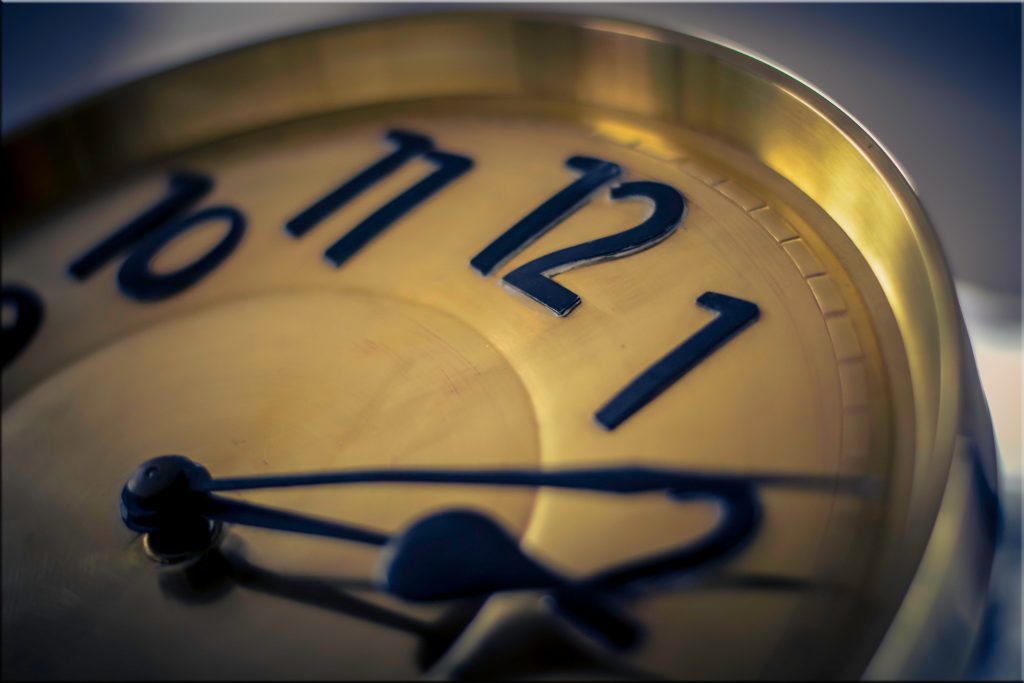 It is well known that the body’s circadian clock operates from a central point in the hypothalamus. But does the body have other circadian clocks that operate independently? Apparently so, according to this study from the journal Cell.

This means, for instance, that the liver sense when someone is staring at a television screen or cellphone late at night. When such activity is detected, the organ can throw the circadian rhythms out of whack, leaving the person more susceptible to health problems. That’s one of the takeaways from two new studies by University of California, Irvine scientists working in collaboration with the Institute for Research in Biomedicine in Barcelona, Spain.

The studies, published in the journal Cell, used specially bred mice to analyze the network of internal clocks that regulate metabolism. Although researchers had suspected that the body’s various circadian clocks could operate independently from the central clock in the hypothalamus of the brain, there was previously no way to test the theory, said Paolo Sassone-Corsi, director of UCI’s Center for Epigenetics and Metabolism and senior author of one of the studies.

To overcome that obstacle, scientists figured out how to disable the entire circadian system of the mice, then jump-start individual clocks. For the experiments reported in the Cell papers, they activated circadian clocks inside the liver or the skin.

“The results were quite surprising,” said Sassone-Corsi, Donald Bren Professor of Biological Chemistry. “No one realized that the liver or skin could be so directly affected by light.”

For example, despite the shutdown of all other body clocks, including the central brain clock, the liver knew what time it was, responded to light changes as day shifted to night and maintained critical functions, such as preparing to digest food at mealtime and converting glucose to energy. 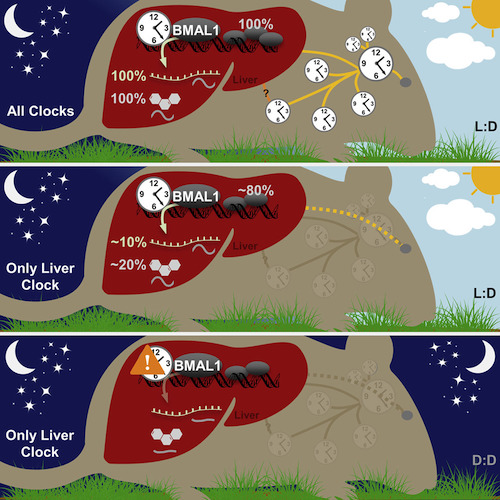 Somehow, the liver’s circadian clock was able to detect light, presumably via signals from other organs. Only when the mice were subjected to constant darkness did the liver’s clock stop functioning.

ABSTRACT/ Mammals rely on a network of circadian clocks to control daily systemic metabolism and physiology. The central pacemaker in the suprachiasmatic nucleus (SCN) is considered hierarchically dominant over peripheral clocks, whose degree of independence, or tissue-level autonomy, has never been ascertained in vivo. Using arrhythmic Bmal1-null mice, we generated animals with reconstituted circadian expression of BMAL1 exclusively in the liver (Liver-RE).

High-throughput transcriptomics and metabolomics show that the liver has independent circadian functions specific for metabolic processes such as the NAD + salvage pathway and glycogen turnover. However, although BMAL1 occupies chromatin at most genomic targets in Liver-RE mice, ciradian expression is restricted to ∼10% of normally rhythmic transcripts. Finally, rhythmic clock gene expression is lost in Liver-RE mice under constant darkness. Hence, full circadian function in the liver depends on signals emanating from other clocks, and light contributes to tissue-autonomous clock function.

Because of modern lifestyles, it’s easy for people’s circadian systems to get confused, he said. In turn, that can lead to depression, allergies, premature aging, cancer and other health problems. Further mice experiments could uncover ways to make human internal clocks “less misaligned,” Sassone-Corsi added.

In upcoming studies, UCI and Barcelona researchers will phase in other internal clocks to see how different organs communicate with each other, Sassone-Corsi said.

“The future implications of our findings are vast,” Sassone-Corsi noted. “With these mice, we can now begin deciphering the metabolic pathways that control our circadian rhythms, aging processes and general well-being.”

In earlier studies, Sassone-Corsi has examined how circadian clocks can be rewired by such factors as sleep deprivation, diet and exercise. Exposure to computer, television or cellphone light just before bed can also scramble internal clocks.