Hydrogen Supports Healing of Metabolic Disease and its Consequences 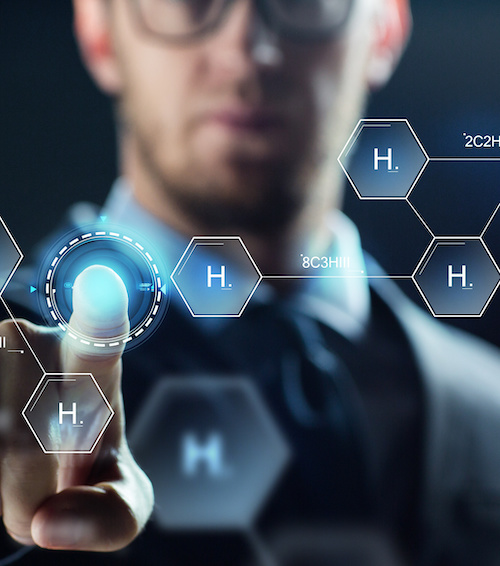 Molecular hydrogen is a novel tool that also may be useful in the fight against metabolic disease and its consequences, each of which continue to increase in incidence. Type 2 diabetes (T2DM), a condition that was estimated to affect 120 million people worldwide in 2000, [1] has quadrupled in global incidence over the last three decades. [2] Diabetes is often accompanied by non-alcoholic fatty liver disease (NAFLD), where excess triglycerides accumulate in the liver, or the more severe form of this condition, nonalcoholic steatohepatitis (NASH), which also involves inflammation.[3.4] Of course, not just the liver experiences the downstream effects of T2DM; the heart, kidneys, and eyes do as well, with oxidative stress and vasculature changes being major contributors to problems in each of these organs.[5,6,7]

Molecular hydrogen, often referred to simply as H2, is a small molecule with substantial antioxidant and anti-inflammatory potential that can easily traverse cellular membranes and biological barriers. [8] Thus, it has the potential to improve metabolic disease as well as its many consequences. In some settings, we have already seen positive findings clinically, while in others, numerous animal models have spurred further research. Herein, we will take a look at the clinical research and mechanisms that have been established with pre-clinical models for a variety of issues related to metabolic disease.

Preclinical and clinical studies suggest H2 may improve metabolic dysfunction including dysglycemia and dyslipidemia, with data also suggesting possible benefits in regard to weight and adipose reduction.

In a publication predating the landmark Nature Medicine publication of 2007 which spurred much of the research on H2 that we now see, [9] the healing mechanisms of Nordenau water were investigated to better understand its reported effect on diabetes. Nordenau water, obtained from an abandoned slate mine in Nordenau, Germany, was known by people in the region to deliver healing benefits if drank or bathed in. [10] The naturally occurring Nordenau water is H2-rich, and was shown in cell studies to have antioxidant benefits, increase myocyte glucose uptake, and increase pancreatic beta cell insulin secretion; in animals, to improve the response to glucose challenge; and in people, to even improve blood sugar and cholesterol over in a very short period, also dramatically reducing oxidative stress. [11,12]

Additional animal models also have shown anti-obesity and cholesterol and glucose-balancing effects with H2 water consumption or intraperitoneally injected H2-rich saline. [18,19,20] In regard to diabetic complications, in cell cultures H2 has been shown to protect endothelial cells from the damaging effects of advanced glycation end (AGEs) products as well.[21]

Clinically, consumption of 900 mL of H2-rich water for eight weeks was shown to significantly decrease levels of small, dense low-density lipoprotein (LDL) particles, modified LDL cholesterol (which contributes to inflammation [22]), and urinary 8-isoprostanes (a marker of oxidative stress) in patients with T2DM or impaired glucose tolerance (IGT). [23] In four of the six patients with IGT, treatment with the H2-rich water also normalized the oral glucose tolerance test.

In one study of subjects with potential metabolic syndrome, consumption of 1.5 to 2 L of H2-rich water daily for eight weeks improved high-density lipoprotein (HDL) cholesterol and the ratio of total to HDL cholesterol, also improving markers of antioxidant status and lipid peroxidation. [24] A similar study found that consumption of H2-rich water for 10 weeks led to a decrease in total and LDL cholesterol, also decreasing levels of apolipoprotein (apo) B100 and apoE, markers of cardiovascular risk. [25] In a small double blind, placebo-controlled, crossover study of middle-age overweight women, it was shown that consumption of H2-generating minerals had a small, but significant, effect of reducing body fat percentage and arm fat index, also significantly decreasing triglycerides and fasting insulin compared to placebo. [26]

In the most recent study, a randomized, double-blind, placebo-controlled trial, for a period of 24 weeks, otherwise healthy subjects with metabolic syndrome were instructed to consume supersaturated H2-rich water or placebo water three times daily.[27] At the end of the intervention period, compared to placebo, those receiving H2-rich water experienced a significant reduction in the metabolic parameters of total cholesterol, triglycerides, fasting blood sugar, and glycosylated hemoglobin (HbA1c). Additionally, numerous markers of oxidative stress and inflammation were significantly lower in those treated with H2-rich water than the placebo group at the conclusion of the study.

Animal models show H2 is hepatoprotective in many settings including common challenges of alcohol and acetaminophen injury,and that treatment with H2 restores glutathione and antioxidant enzyme levels, even promoting liver regeneration. [27,28,29] In animal models of fatty liver disease, treatment with H2 also decreased oxidative stress, inflammation, and tissue damage, additionally reducing hepatic lipid accumulation. [29,30] Investigation into the effect of dose found that treatment with a higher level of H2 was more protective, also resulting in an increase in lean body mass. [30] In the standard model of NASH-induced hepatocarcinogenesis, a reduction in the amount of tumors and their size was seen with H2 treatment.[29]

In a randomized, double-blind, placebo-controlled study with a two-week washout, the effects of H2 were studied in 12 overweight patients with mild to moderate NAFLD. [31] Participants were instructed to consume 1 L of H2-rich water or placebo daily for 28 days. After treatment with the H2-rich water, individuals were found to have significantly decreased liver fat accumulation (as assessed by dual-echo MRI) compared to treatment with placebo, as well as a reduction in aspartate aminotransferase (AST) levels. No other parameters evaluated were significantly altered by the treatment.

Many of the things already mentioned also play into a reduced risk of cardiovascular disease. Additional animal models have shown that supplementation of H2 protects against the development of atherosclerosis in apoE knockout mice (a standard model of atherosclerosis); [32] stabilizes atherosclerotic plaques, decreases macrophage infiltration, and reduces oxidized LDL in mouse models of hypercholesterolemia; [33,34] and increases nitric oxide synthase activity in diabetic mice, improving erectile function. [35]

Consumption of H2-rich water also significantly reduced intimal hyperplasia and improved endothelial integrity in animals after an arterial vein grafting procedure [36] and attenuated cardiac hypertrophy and improved cardiac function in diabetic mice. [37] Numerous models have also shown that supplementation of H2 reduces damage to the heart [38,39,40] brain, [41] and other organs with ischemia/reperfusion injury [42, 43] – with benefits being shown clinically as well in patients post mild- to moderate-cerebral infarction. [44]

Although there are no long-term studies specifically investigating the renal-protective effects H2 may offer to diabetics, a clinical study has been done to look at the benefits H2 may have in patients undergoing dialysis. [51] In this study, patients were either treated with conventional dialysis or H2-enriched dialysis solution for 12 months in addition to routine care. Although there were no significant differences in dialysis-related parameters, the individuals receiving H2-enriched dialysis solution had a reduced need for anti-hypertensive medications and subjectively experienced less fatigue and pruritis than those receiving conventional dialysis. Multivariate analysis confirmed these changes were independently and significantly related to the use of H2-enriched dialysis solution.

Vision loss is another common diabetic complication, usually due to many changes that affect the retina. This includes macular edema, vascular hemorrhage, retinal detachment, and neovascular glaucoma. Long-term hyperglycemia and oxidative stress lead to blood vessel dysfunction, abnormal permeability, vascular occlusion, and ischemia. [52] In attempts to revascularize damaged tissue, there is an increase in growth factors such as vascular endothelial growth factor (VEGF) and insulin-like growth factor 1 (IGF-1), which leads to further problems due to poor integrity of the blood vessels produced. [53]

With its small size and neutral charge, H2 can easily pass through the blood-retinal barrier (BRB) and thus offers many potential benefits for ocular health. [54] In the eye, we also see the use of H2 as a topical drop or intravitreal injection. Although this offers an opportunity for more directed application of H2, benefits also may be seen with oral consumption simply due to the nature of this molecule.

Multiple studies have looked at the effect of H2 on animal models of diabetic retinopathy as well as other types of retinal injury. In streptozotocin-induced diabetes, daily intraperitoneal injection of H2-rich saline for one month was shown to decrease retinal cellular apoptosis, vascular permeability, retinal parenchyma thickening, and overall histological changes due to diabetes in the retina. [55, 56] Additionally, a reduction in BRB breakdown and an increase in antioxidant enzyme and brain-derived neurotrophic factor (BDNF) levels were seen. Other standard models have shown that treatment with H2 decreases retinal neovascularization, [57] VEGF expression, and injury with ischemia/reperfusion, [58, 59] a common factor in diabetic retinal injury.

Clearly, substantial data points towards benefits that H2 may offer to individuals struggling with diabetes and its many complications. Although we don’t see clinical studies in all of these settings, findings from numerous animal models suggest H2 may attenuate each of these common diabetic complications.