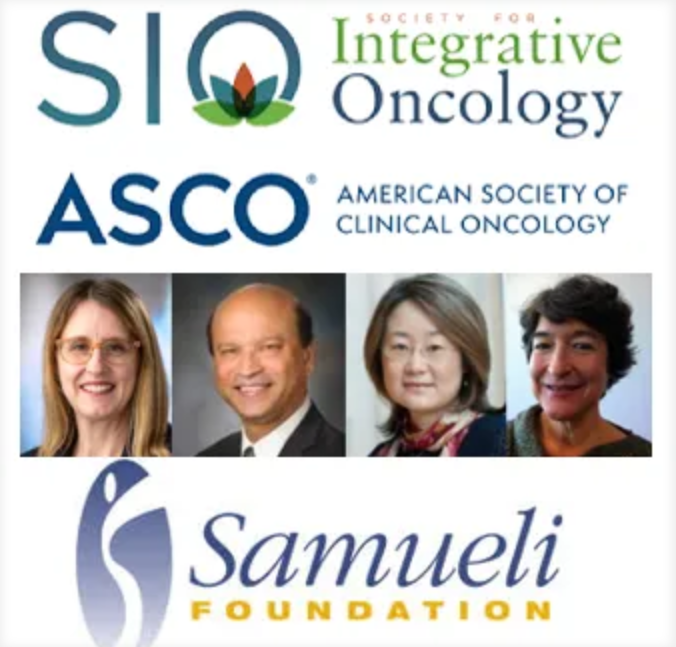 The early “integrative medicine” period clearly was one of “non-integrated integration.” The hospital or insurer wanted to throw the consumer an integrative bone in the competitive marketplace. They produced stand-alone integrative clinics or a carve-out insurance products. Offerings, in these forms, serve dual purposes. The medical delivery organization or insurer pleases patients by offering a little yoga, or acupuncture, or manipulative therapy or massage. At the same time, the non-integrated nature of what is offered pleases medical leadership: they are not asked to take the integrative methods seriously. They needn’t cross the medical-cultural divide to weigh whether the integrative approaches may be better than usual care. For most of the past decade, the Society for Integrative Oncology (SIO) has been building bridges across the chasm. Twice they’ve developed integrative oncology guidelines with mainstream oncology organizations. Now, through an unrestricted grant from the Samueli Foundation, SIO and the influential American Society for Clinical Oncology (ASCO) are commencing a project to raise three additional girders to bridge treatments.

In a media release on the project, current SIO President, Ting Bao, MD, DABMA, MS, a breast oncologist and integrative oncology investigator at Memorial Sloan Kettering Cancer Center is quoted this way: “It is critical to separate evidence-based, integrative health approaches from those without evidence. These guidelines will help the cancer community ensure safe, effective use of integrative approaches for managing patients’ cancer-related symptoms.”

To learn more about the partnership, I reached Heather Greenlee, ND, PhD, MPH, an SIO through-line across their guidelines since 2013. Greenlee’s career in Seattle and New York on integrative health research proved to be instrumental in creating the foundation for SIO’s partnership with ASCO. Shortly after completing her naturopathic medical degree at Bastyr University, Greenlee completed a postdoctoral research fellowship funded by what is now the NIH National Center for Complementary and Integrative Health. She did the work at Seattle’s Fred Hutchinson Cancer Research Center while earning an MPH in epidemiology at the University of Washington.

Greenlee’s pursuit of a doctorate in epidemiology took her across the country to Columbia University. There, her involvement with SIO included co-chairing one of SIO’s annual conferences in New York and a term as the organization’s president. She was a co-author on the organization’s update to the 2007 lung cancer guideline effort that was led by Gary Deng, MD, PhD, the medical director for integrative services at Memorial Sloan Kettering across Manhattan from her Columbia base. The updated guideline on integrative therapies for lung cancer was published in 2013 in Chest, the official journal of the American College of Chest Physicians.  Later, Greenlee co-chaired SIO’s clinical practice guidelines focused on the use of integrative therapies during breast cancer treatment. Her co-chair was Debu Tripathy, MD, professor and chair of Breast Medical Oncology at MD Anderson Cancer Center and SIO Past President.  The breast cancer guidelines were first published in a Journal of the National Cancer Institute monograph in 2014. A comprehensive update was published in CA: A Cancer Journal for Clinicians in 2017.

When Greenlee returned to Seattle to continue her research and serve as medical director of integrative medicine at the Seattle Cancer Care Alliance, a joint effort between Fred Hutch, the University of Washington and Seattle Children’s Hospital, she re-joined the same sprawling operation that included a senior investigator named Gary Lyman, MD, MPH. Greenlee knew of Lyman’s work. Early in her career she had heard Lyman speak on guideline development: “I remember a light bulb being lit when I first heard Gary speak. I realized that I wanted to create guidelines for integrative oncology.” Lyman, as it turns out, has long been involved in ASCO guideline development and is currently chair of ASCO CancerLinq research and publications committee. Greenlee approached him in Seattle and he “instantly supported our work.” Lyman helped bring along ASCO’s breakthrough endorsement of SIO’s breast cancer guidelines when he co-chaired the endorsement panel with another former SIO president, Lorenzo Cohen, PhD. ASCO’s endorsement was published in the Journal of Clinical Oncology in 2018. Greenlee was a co-author.

The way Greenlee tells it, there was some serendipity in how the new collaboration with ASCO was financially energized. She had a chance encounter with Wayne Jonas, MD, the longtime integrative health colleague and advisor of philanthropists Henry and Susan Samueli. Greenlee, who had known Jonas for some time, described to Jonas the dimensions of the envisioned project: “We realized there were synergies in that the [Samueli] Foundation shares our interest in dissemination” of the emerging science. The Foundation gave an unrestricted grant to support the work.

Greenlee is part of a trio, including Tripathy and Suzie Zick, ND, MPH that is co-chairing the SIO Clinical Practice Guideline Committee. Zick is Greenlee’s long-time colleague, fellow naturopathic physician and like her two co-chairs, also a past SIO president. Zick is a research associate professor at the University of Michigan where she is co-director of the integrative medicine program. She leads the NCI-funded Integrative Oncology Scholars Program.

The Three Topics for Guideline Development

The release notes that SIO and ASCO will convene independent panels of experts representing members of both societies to produce the three evidence-based guidelines.  The topics are:

While SIO’s first two guidelines related to lung and breast cancer were “disease site specific,” as Greenlee put it, the decision here was to be “symptom specific”. The strategy creates potential to draw on a broader base of randomized controlled trials and then to potentially have more widespread application. I asked Greenlee how they set on the three topics. She smiled:

“SIO members come from a broad set of disciplines and we try to be a democratic organization. With input from SIO leadership, we drafted a list of possible topics and sent them to the membership asking them to rank their priorities. Then we meshed what we learned from SIO members with ASCO’s priorities to determine the best fit. ASCO already had a robust guideline effort and there was nice synergy. ASCO has been very generous with their mentorship during this process. It’s in everyone’s best interest to have well-designed, well-created guidelines that the medical community can use.”

The respect appears to be reciprocated. In the media release on the project, the chair of ASCO’s clinical practice guidelines committee, Douglas E. Peterson, DMD, PhD reflected Greenlee’s perspective with similar enthusiasm:

We are delighted to collaborate with SIO on the development of evidence-based guidelines that will help optimize the care of patients with cancer using therapies complementary to cancer treatment.

Greenlee describes SIO’s guidelines group as “an ambitious team – we are small but mighty.” A half-dozen of the SIO’s leaders are involved in the overall management.  For two of the guidelines that SIO will lead, the plan is to pair an SIO co-chair with an ASCO co-chair. Then a panel will be assembled for each guideline that will be “very diverse both in terms of area of expertise and geographic location.” The two organizations are seeking maximum, global impact. Work will include structured systematic reviews of the related evidence for multiple modalities on each symptom-specific topic.  They are expecting to complete and publish all three by 2022.

The Impact of Guidelines

I asked Greenlee if they had much evidence of the impact from the first guidelines. She reflected:

Good question. As a researcher I wish I had the data. I can send you some evidence of the impact of the publications. [This is the evidence assembled in the chart above.] I wish I had information on the total number of downloads. We’ve seen as many as 78 citations on a guideline. We do know that the breast cancer guideline has reached a lot of oncologists. We know that people take these guidelines to their medical leadership to make the case that now that we know which therapies are effective, we know what is best to implement in clinical practice. In the guidelines, we rank the level of evidence for different treatments.  The stronger the evidence, the stronger the recommendation.  That said, there are many research gaps that need to be filled.

The top therapies on which there is evidence are mind-body treatments – including mindfulness-based stress reduction (MBSR), progressive relaxation, and guided imagery – acupuncture and massage. She calls the mind-body research “robust, and it’s growing.” She adds that “we have not yet seen a convincing body of evidence on use of the majority of nutritional supplements in the oncology setting.” She notes that “there is increasing interest in the relatively new field of cannabis research”, adding that the National Cancer Institute is hosting a conference on this topic in December of this year.”

Toward a New Standard of Care

The proliferation of the “integrative” term in the brochures and marketing of oncology programs has been documented by former SIO board member, integrative health consultant Glenn Sabin. The ongoing announcements of inclusion of integrative therapies in many oncology departments have left some to conclude that the integrative model has become standard of cancer care in the United States.

I asked Greenlee what she thought. Her response reflected this caveat Sabin put at the top of his list: “Types of integrative services offered widely vary.” Reflected Greenlee: “Most cancer centers still lack robust integrative oncology services.  Institutions are struggling with reimbursement models. That said, some are incorporating integrative therapies into specific clinical pathways.” She pauses and adds: “That’s why we are focusing on these three areas of pain, fatigue, and anxiety and depression that cut across multiple cancers.”

In my recent post on the five key factors driving integrative care in the USA, two were “Setting Standards” and “Evidence”. SIO’s work advances both of these markers. SIO’s partnership with ASCO underscores the importance of the 5th: “Relationships, Relationships, Relationships.” The integrative health field has begun to see this type of close collaboration in the chronic pain arena by the Alliance to Advance Comprehensive Integrative Pain Management and in childbirth practices by the National Association of Certified Professional Midwives. It’s time to ramp up such bridge-building across other specialties.