John Weeks on “Why You Didn’t Get Hit up to Subscribe:” Gratitude to the Integrator Sponsors 2006-2020 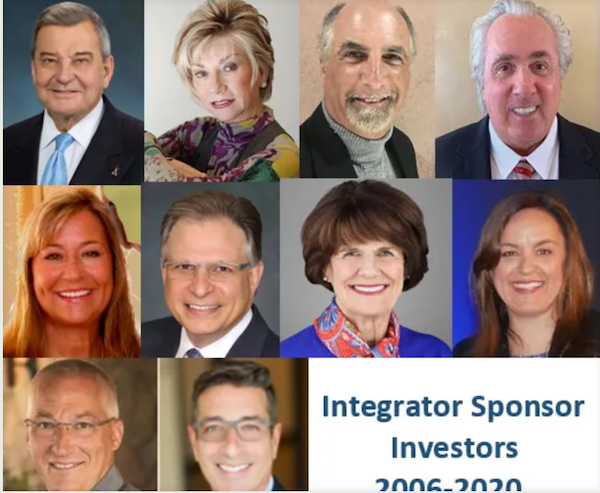 From time to time someone will assume my writing of the Integrator is a “labor of love.” There is something in that, for sure. Yet the truth is that the Integrator Blog News & Reports would have been stillborn if I wasn’t paid for the work. In piecing together from various sources the income I needed for my family over the last quarter century, payment for chronicling the movement for integrative medicine and health has continuously been a part. I’ve chosen not to hit you up for a $50 or $25 or $100 annual subscription for one reason: a terrific set of individuals have on their own or through their businesses relieved me of all that stress and management. Please join me in honoring these Integrator sponsors, 2006-2020.

The Integrator has always been a one-person shop. Income has ranged from a high of $60,000 in the first years of robust community building activity and Readers Forums to typically $25,000-$35,000 in recent years. The story begins not with an investor, but with a suggestion. It was 2005. My family and I were returning from 3 years away in a part-time working sabbatical in Costa Rica and Nicaragua. I needed new income. I had the good fortune to have a futurist as a friend in Clem Bezold.  I called Clem to pick his brain. After a couple minutes, he hit on it: “There’s a thing that’s started up since you’ve been away. It’s called ‘blogging’. You’d be great at it.” Never mind that the Integrator‘s model of taking comments has always been an old-media, curated, letters-to-the-editor sort. The idea hit home. Now, what’s the business model?

Up stepped the Godfather! Lou Sportelli, DC served for decades as president of what is one of the largest businesses in the integrative health space, the NCMIC Group malpractice insurance company. Originally by and for chiropractors, the firm was proactively engaging the integrative movement when I met Lou. From his position as NCMIC’s leader, and now as president of the NCMIC Foundation, Lou’s been a terrific chess player, making strategic philanthropic investments. He believed in relationship-centered integration, and served on the board of his community hospital in a time when that was unheard of. From 1999 forward, Lou began to invest in my organizing work. We have had the pleasure of “co-conspiring” on multiple projects. In January 2006, Lou committed $15,000 for no benefit to NCMIC Group other than a promised logo on the then non-existent Integrator masthead. The first money is the toughest. NCMIC’s investment continued for 6 years. Recently, Lou has chosen to make a significant annual gift from his own pocket. Thank you Godfather!

Now a jump toward the other end of the time-frame. Another individual stepped in at a key moment with a commitment that would total $70,000 between 2016 and 2019. I had spent 2007-2015 focused on growing and directing what is now the Academic Collaborative for Integrative Health. During the time, I had less income dependence on the Integrator. Now I needed more income again. Ruth, a rare activist-artist-philanthropist, had become a close adviser and investor in our ACIH work. When I left, she made me a 3-year commitment to the Integrator that she extended for a 4th, anchoring my work during that period. Bless the angels of the philanthropic world who understand the stress-relieving and enabling power of multi-year commitments! I’ve written about her work as an author in a few places, including this Huffington Post piece. She’s nursed multiple terrific initiatives in the integrative space. Thank you Ruth!

In 1999, a seemingly outrageous story emerged of cost savings from an integrative primary care pilot that was carried out in the context of a Blue Cross-Blue Shield plan and published in a peer-reviewed and indexed journal. When I checked into it, I found it to be the brain child of Richard Sarnat, MD, a board certified ophthalmologist and co-founder of the AMI Group. The firm would also offer a second integrative pilot in Florida Medicaid that was also an out of the box, whole practice examination showing major reduction in conventional costs.  Sarnat and his partner, Jim Zechman, had began earlier to support my organizing work, with the Integrative Medicine Industry Leadership Summits, as did Sportelli. They stepped in for a solid run of a half dozen years of Integrator sponsorship from 2006-2011. Thanks Rick!

I wrote this in 2012: “Very early in the evolution of “integrative clinics” I heard rumor that some character was starting an ambitious center near Scranton, Pennsylvania. Scranton was not generally consider a point of light for the movement. The clinic was the Inner Harmony Wellness Centers, founded by mindfulness teacher and sometimes philanthropist Peter Amato. I included Amato’s clinic in 1999 in the Integrative Clinic Benchmarking Project from my hard-copy Integrator for the Business of Alternative Medicine. We also shared an interest in policy. Peter, like Lou and Richard, participated in, and helped sponsor, the 2000-2002 Integrative Medicine Industry Leadership Summits. Peter’s openness about sharing the successes and challenges in his various business models has made him a useful consultant to many. Tremendous support from 2007-2010.” Thank you Peter!

So much of what I have been able to do in this work since 2000 has been energized by multiple partnerships with Lucy Gonda. There was a time when Gonda was the only philanthropist who was willing to substantially invest in the advance of integrative care through supporting the participation of the distinct, licensed integrative health professions. (Westreich was the second.) Like Lou, Peter and Richard, Lucy supported the Integrative Medicine Summits. From 2002-2004, she also funded the electronic CHRF Newsfiles, written then by healthcare journalist Elaine Zablocki, that helped link the professions and stakeholders in the community who’d participated in the Summits while my family and I were away on sabbatical. In 2004-2006, Lucy chose to become the anchor sponsor of the National Education Dialogue to Advance Integrated Health Care: Creating Common Ground. She also provided a multi-year boost to get ACIH rolling (2007-2009, plus 2011). From time to time in key moments, Lucy invested in the Integrator. I have happily enjoyed her coming around to make a multi-year commitment to the Integrator in recent years. A nice end parenthesis! Thanks Lucy!

When I was working to renew my Integrator work in 2015, John Scaringe, DC, MEd stepped up. The president of Southern California University of Health Sciences, Scaringe had served as one of the leaders of ACIH. His strategy at SCU was the most thoroughly invested in interprofessional education of any of the institutions associated with the complementary and integrative health professions. I tried to present the Integrator affiliation with John in a way that might show some value to the university, thanks in part to a relationship with Rob Lutz at Today’s Practitioner. In truth, the four years of investment for Scaringe and SCU has been evidence of the commitment they have to the advance of the entire integrative health and medicine field. Thanks much John!

This is something of a public confession. While observing the incredible generosity of Penny and Bill George to advance integrative health via the Academic Consortium for Integrative Medicine and Health, I was always frankly jealous during my years with NED and ACIH that we could only get a very few of those dollars to flow to our initiatives. I knew, in particular, that the Integrator was viewed as a useful – if sometimes ornery – part of the movement by multiple leaders of the Bravewell Collaborative where the Georges were important. The Bravewell leaders likewise did not choose to strategically invest for many years in ACIH. Made me grumpy! So it was a special kind of healing when Penny let me know that following a significant personal contribution to the Integrator in 2019, the George Family Foundation would become a 3 year commitment in 2020-2022, with ACIH as fiscal partner. (I hope the irony of me not staying around to receive two years of the commitment is not lost!)  That the George Family Foundation also recently made a multi-year investment in an ACIH project and another significant investment in a JACM special issue with which I am involved has added to the healing. Thanks much Penny and Bill!

The first, robust years had other investors who provided important help for one or two years. Via Lou Sportelli, Tino Villani, DC (R), the president of a complementary medicine benefits management company Triad Healthcare in which NCMIC held a stake, came in. Villani contributed to multiple Integrator dialogues. In the same period, a colleague from my work with the naturopathic community, Clyde Jensen, PhD, talked Standard Process CEO Charlie DuBois (L) into a year of Integrator sponsorship. Their investment was important. It came in the start-up years when the Integrator and the income from it was my dominant work. Thank you Charlie and Tino!

If you plug “Integrator-Round-up” into the search function here at Integrative Practitioner, you will see a long list of the monthly “newsletter within the newsletter” that I wrote for a decade. Working with Liz Plizga, the lead executive of IP’s early web presence, we developed a mutually beneficial relationship. Pushing the monthly Round-up out to their list became a way of the company announcing that they were more than merely the Integrative Healthcare Symposium conference company. For me it meant a guarantee that the Integrator copy would also get out to a broader list – as the Today’s Practitioner relationship has for the last three years. We were each investing in each other. The relationship lasted most of a decade. Mine with the Symposium continues. How can one not be grateful to a company that has given my spouse and me and a trip to New York every year, to a venue that is a half block from MOMA. That’s gold. Thanks Liz!

So, if you’ve found value in the Integrator over the years, and credited me for it, I urge you to reflect on how, through the entire run, the work would was only possible because these human beings decided to invest in the work. It has been a paid labor of love. Not wealth generating, but it helped pay the bills. And if it weren’t for these mainly quiet partners, I wouldn’t have had the luxury to spend my professional time figuring out how to put the Integrator in service to the movement. Credit them. Give them thanks!