The Chopra Library at the Walton-Funded and Gaudet-Led Whole Health Institute: What’s the Plan? 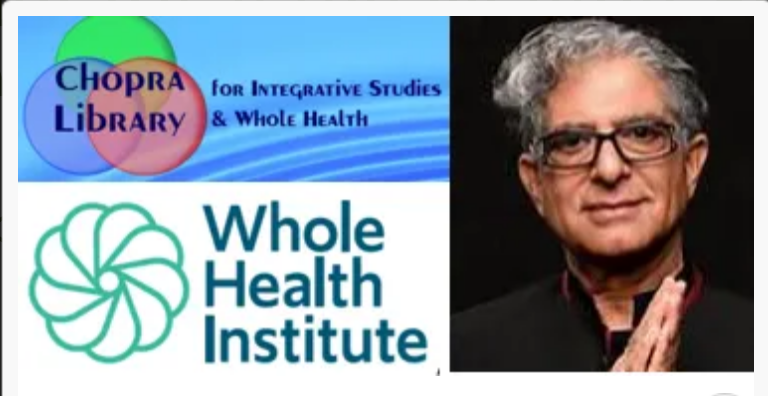 If you ask Deepak Chopra about the purpose of the Chopra Library, he will turn quickly speak to the challenges at Wikipedia for topics like integrative medicine and well-being. “Our original intention,” Chopra recalls, “was to counter the agenda at Wikipedia that all this is not scientific.” The mission to provide quality, reliable evidence on integrative and consciousness science was supercharged this past year when word came out that Chopra’s library would become a department at the new Whole Health Institute (WHI). WHI and the library are each backed by philanthropist Alice Walton whose father Sam, the Walmart founder, recalls Chopra, “first came to see me 30 years ago.” I got in touch with Chopra, and the library’s executive director Ryan Castle – a former Wikipedia editor – to learn more about what the field might expect from this other part of the WHI entity.

At the time of this writing, the intersection of WHI and the library was in double flux. As shared in this article, COVID re-shaped plans at the WHI, which is directed by integrative medicine physician and Veteran’s Administration “whole health” founder Tracy Gaudet, MD (L). The WHI website is only now just being constructed. Meantime, the Chopra Library’s online presence has not yet migrated from the original site as a project of the Chopra Foundation – for which Alice Walton (R) is notably a member of the Advisory Board – to its new WHI home. There, more significant backing from Walton is anticipated.

Efforts to realize the library’s original, ambitious mission to become “a Wikipedia for well-being” stimulated the move. Said Chopra:

I realized I couldn’t support taking it to the next level through the Chopra Foundation. I was not able to do it myself. So when Alice said, why not bring the research library repository to [the WHI], it made perfect sense. I just returned from a WHI board meeting and I am thrilled that the library is in their hands. What they are doing next is so big!

One gains some sense of the ambition and potential for the coming effort by witnessing the work that Castle (L) and scientific director William Bushell, PhD have already completed during the first level of development inside the Chopra Foundation. A constantly evolving interactive Topic Map presently links users, for instance, to 8740 Chinese medicine studies, 4213 on Ayurveda, 7951 on chiropractic, and 258 on meditation. And these are just 4 among dozens of other fields. The breadth of interest and connectivity is evident in a set of 4100 citations related to genomics. Another field of interest that is remarkable and welcome for its explicit inclusion in the integrative space is “Morality” with its 4193 citations.

Castle appears to be the right person for the job. He has intimate experience of the power of the historic bias against non-biomedical approaches at Wikipedia. He’s seen the bias playing out not only against fields such as acupuncture, yoga, and integrative medicine but also biographies of key players. One is Chopra’s own Wikipedia page. Recalled Castle, who spent a decade as a Wikipedia editor: “Early on Deepak’s page just said that he’d written a bunch of books that would be better off burned.”

Castle shares a paradoxical experience with efforts to change Wikipedia. He describes trying to go “toe-to-toe” with Wikipedia’s dominant naysayers by providing scientific information directly to them. His experience is that the goal posts just move. The complaint would “shift from there’s no evidence at all, to the methods are wrong, the studies are flawed, the N is not large enough, or the journal in which the research is published is not of high enough impact.” He summarized: “It’s been the loudest voices that have dominated Wikipedia, not the most truthful ones.”

Yet at the same time, Castle sees and can document change at Wikipedia “as the zeitgeist changes” and as evidence mounts for things that were once more controversial. Yoga is an example. “The changes are often small and incremental, but they are there.” Chopra’s own page has gone from 70% of the accepted citations being negative to just 40% – not where they want it to be, but a significant shift. One can read three full paragraphs prior to encountering charges of being unscientific.

Castle also points to the meditation page. Initially, he recalls, all that was said was that there was “no value beyond relaxation.” Now the page is extensive, respectful, and devoid of commentary from naysayers. The strategy for change, says Castle, is not “dominating the trolls but managing the zeitgeist.” The Chopra library site is intended to be an exceptional tool for anyone seeking to use science to open eyes and shift practices.

Castle said that while the basic mission will continue, it will be expanded. The site will begin to include more data and studies that support the “whole health” concept. In further alignment, new resource sections related to social determinants of health, to ethics, and to value-based payments will be created.

One intriguing area of work for the Library is a COVID-19 Task Force that includes top scientists affiliated with MIT, Harvard, and UCSD. A work product is a recent publication led by Bushell and involving Chopra, Castle, Paul Mills, PhD and others entitled “Meditation and Yoga Practices as Potential Adjunctive Treatment of SARS-CoV-2 Infection and COVID-19: A Brief Overview of Key Subjects.” The power of the group’s work is evident in the reception of a media release on the study: it was downloaded 27,000 times in the first 24 hours. The author team, which includes Task Force members Harvard neuroscientist Rudi Tanzi, PhD and the Dean of the Harvard T. H. Chan School of Public Health, Michelle Williams, ScD, anticipates continuing to work to increase its impact in bringing overlooked approaches forward. Castle is clear that the expanding work continues the original mission:

We are not so much separating as we are shifting. Deepak is on the board [of WHI]. Any initiative the Chopra Foundation comes up with that is aligned, we’ll be involved. There are no boundaries. We will continue to collaborate.

While prepping for this article I listened to a link Chopra, an author now of 90 books — with a new one due out in a month – sent me entitled Conversations at the Cutting Edge of Science: Solving the Hard Problem of Conciousness. The challenging dialogue hosted at UC Irvine between a cognitive psychologist, Donald Hoffman, PhD – who collaborates regularly with mathematicians on the front edge of consciousness exploration – and Chopra, the spiritual influencer, reminded me of a concern I had a year ago on learning of the new WHI/Chopra Library entity.

In fact, the whole health approach that Gaudet pioneered at the VA and now more broadly via WHI puts something that is exotic, for health care delivery, at the center of the model. This is the core importance of accessing and supporting life purpose of the individual veteran in that person making healthy choices. What becomes clear is that the Deepak Chopra and Paul Mills-led Chopra Foundation, with Walton as an adviser, will continue its work at the frontiers of science even as Gaudet’s emerging Whole Health Institute – with Chopra and Walton each on the board – ascends into its potential as a leading force for shifting the medical industry to a system that focuses on health creation. In the pairing, the mind and the body will each be potentiated, and pressing to break their separate and similar envelopes of human restriction. As Castle noted, where there is alignment, there will be collaboration.