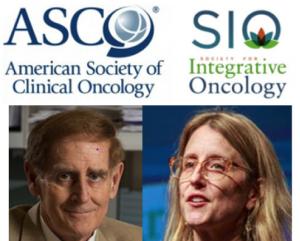 The movement of medicine toward an integrative model took an important step in early June. The American Society of Clinical Oncology (ASCO) endorsed a clinical practice guideline for integrative therapies during and after breast cancer treatment.

The endorsement was published on June 11, 2018 in ASCO’s Journal of Clinical Oncology as “Integrative Therapies During and After Breast Cancer Treatment: ASCO Endorsement of the SIO Clinical Practice Guideline.” That guideline, with a few added discussion points, has beenpublished in 2017 by the Society for Integrative Oncology (SIO). According to one major cancer center, ASCO’s move “sent a clear signal to breast cancer patients and their care teams: It’s OK to integrate.”

The endorsement from oncology’s top organization resulted from SIO advocacy for the science of integrative practices for women with breast cancer. SIO’s success parallels an earlier SIO effort on lung cancer that led to a 2013 publication in Chest, the official journal of the American College of Chest Physicians. That guidelines has twice been updated.

A parallel example of science advocacy is the integrative pain outcome provoked by the Academic Consortium for Integrative Medicine and Health (“the Consortium”). Starting in 2013, the Consortium approached the Joint Commission with additional evidence for acupuncture and other integrative practices in pain treatment. Like the ASCO decision, the Clarification of the Pain Management Standard cast powerful light on multiple non-pharmacologic, integrative methods.

In each case, the endorsement resulted scientists of integrative health practices urging greater respect for emerging bodies of scientific literature in clinical directives. These scientific activists laboriously reviewed controlled trials and systematic reviews. They basically released integrative evidence from the shadows of habitual, clinical neglect. The SIO and Consortium leaders took a step toward insuring that their emerging integrative science did not echo about in an uncharted wilderness but would indeed make a sound.

The work of each echoed the campaign of the March for Science on Earth Day 2017 that was inspired by the political neglect by the Trump administration and others of climate science.

There is an important distinction here in types of advocacy. Many researchers don’t see themselves as advocates. Yet the work of the SIO and Consortium is not advocacy for the integrative health model, per se.  Rather, it promoted respect for science, and thus for the optimal science-informed medicine. Yet, no question, these successes create useful leverage for those promoting integrative care in clinical, policy, regulatory, and legislative arenas.

A past president of SIO and co-chair of the SIO guideline task force, naturopathic physician Heather Greenlee, ND, PhD, called the ASCO endorsement a “very important step for the field of integrative oncology.”

ASCO’s endorsement process was co-led by Gary Lyman, MD and integrative oncologist Lorenzo Cohen, MD. Greenlee, the second author on the paper, explains that the review methods required “a very high bar” for evidence: “We followed a very rigorous process with both the SIO and ASCO to evaluate these therapies. There were many different disciplinary eyes vetting them.”

Lyman and Greenlee are presently colleagues at Seattle’s Fred Hutchinson Cancer Research Center. The Hutch’s article on the endorsement bluntly describes how “skeptical” most oncologists are relative to integrative practices. Lyman’s comments also fall short of proactively recommending integrative practices: “If patients are using these therapies in addition to effective scientifically proven cancer therapies and their doctors are aware of it, we’re comfortable with it. The only time it becomes an issue is when these are not disclosed or are used instead of conventional effective therapies.”

Greenlee acknowledges that the context of prevailing skepticism was a core motivation for SIO’s guideline strategy: “Because our field is so controversial, it is important that our guidelines be squeaky clean. In SIO we take a conservative approach and base our recommendations on randomized controlled trials to make sure they are accurate.”

ASCO’s integrative recommendations were summarized for The Journal of Clinical Pathways  as:

The origins of SIO’s breakthrough go back 15 years to the founding of SIO as an interprofessional organization. Scientific conferences, multiple collaborations with the National Cancer Institute, publication of the lung cancer and then breast cancer guidelines each added gravitas. The next step was to formally bridge with the the old-line oncology organizations. The reason is ASCO’s global reach. Explained Greenlee: “We think it is important to get really solid evidence-based guidelines to both patients and clinicians.” She shares that SIO has a clinical guidelines committee that is presently evaluating what its next guideline effort might be.

This SIO-ASCO work product, like the Consortium-Joint Commission pain outcome, are causes for celebration for patient care options, for interprofessionalism, and for the integrative model. They also beg an additional question. Are guidelines for another condition, beyond cancer and pain, awaiting a targeted, persistent march for science to advance respect for the evidence supporting another integrative practice?