Hydrogen as a Therapeutic Gas: The Science Behind the Bubble 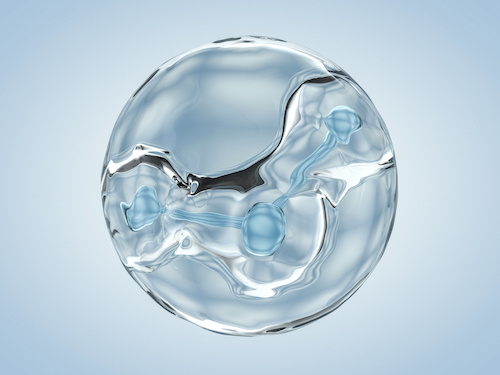 Hydrogen may simultaneously be one of the most basic and broadly applicable therapies that exists. Having one proton and one electron, hydrogen is the simplest element—if assessed only by these characteristics. Much like the halogens (substances like fluorine, iodine, and bromine), hydrogen naturally forms a bond with another hydrogen atom in order to fill its outer electron shell, resulting in a diatomic, neutral, stable molecule of hydrogen—which we write scientifically as H2.

The earliest therapeutic application of H2 gas dates back to the 1940s, when it was used for the prevention of decompression sickness in divers.[1,2] In 1975, hyperbaric H2 had a surge of interest when research showed that H2-treated mice experienced significant regression of squamous cell carcinoma.[3] However, such a therapy was not incredibly practical due to the flammability of H2 gas when present at more than 4% in air, and thus research did not progress substantially.

In 2007, landmark research was published in Nature Medicine, showing benefits with H2 in forms that were practical clinically: via inhalation at a concentration of less than 4%, and as a dissolved gas in a cellular nutrient solution.[4] In animals, the inhalation of H2 substantially decreased damage to the brain after ischemia/reperfusion injury, and in stressed cells, the dissolved H2 gas reduced the amount of hydroxyl radicals (•OH) generated in both the cytoplasm and the nucleus. Additionally, H2 was shown to protect the DNA from oxidation and cellular lipid membranes from peroxidation, ultimately preventing cellular death in a dose-dependent fashion.

In this publication and others that followed soon after, it was shown that H2 actually is highly effective because it is a weak reducing agent rather than a strong reducing agent.[4,5] Thus, it reacts primarily with highly reactive and toxic oxidants (such as •OH and peroxynitrite [ONOO-]), leaving weaker (and biologically necessary) oxidants like nitric oxide (NO) and hydrogen peroxide (H2O2) present. H2 additionally has been shown to modulate cellular signal transduction, protein activity, and genetic transcription by activating the nuclear factor erythroid 2-related factor (Nrf2)–antioxidant response element (ARE) pathway, [6] leading to a biological response that persists far longer than the time that H2 is present in the body.[7]

Ergo, the antioxidant principles and other effects of H2 have a broad effect on physiology. And, this translates to a diverse spectrum of potential benefits—so many, in fact, that in the last two decades, there have been over 1000 scientific studies [8] reflecting over 170 different human and animal disease conditions or models.[9]

Because of its size, neutral charge, stability, and nonpolarity, H2 readily passes into all cellular compartments and biological tissues, rapidly appearing in the expired air from the lungs. [10] After consumption of H2-rich water, the H2 concentration of the breath and plasma has been shown to be dose dependent, peaking between five to 15 minutes, and returning to baseline roughly 45 to 90 minutes later, depending on the ingested dosage. However, its biological effects are not limited to the time it remains in circulation, evidenced by numerous scientific studies.[7,11,12]

The power of H2 as an antioxidant is somewhat more prominent in a highly stressed state.[13] Under normal, unstressed conditions, the body always experiences some aspects of oxidative stress, which enables our very existence: biologically necessary oxidants like NO and H2O2 trigger cellular signaling pathways, the immune response, and vasodilation.[14] However, when the body is put into a highly stressed state (which exists in most chronic diseases or during treatment for a condition like cancer), the threshold above which these and other oxidants can be beneficial is exceeded. It is above this threshold when many of the benefits of H2 may be best realized, as it reduces production of excessive amounts of these important oxidants.[15]

In addition to neutralizing •OH and ONOO- radicals and reducing excessive NO and H2O2 production, H2 activates the Nrf2/ARE pathway, turning on the transcription of antioxidant elements, detoxification enzymes, and proteins required for glutathione synthesis and recycling.[5,16,17,18] These effects of H2 are eliminated in various Nrf2 knockout or pathway-blocking models.[19] In vitro, the impact of treatment with H2 on Nrf2-related antioxidant protection has been shown to extend up to eight hours after H2 is no longer detectible in the cellular medium.[12]

Numerous animal models utilizing lipopolysaccharide (LPS)-induced inflammation or ischemia/reperfusion injury have demonstrated mechanisms via which H2 may be protective.[20,21,22,23] Generally, treatment with H2 has been shown to reduce numerous cytokines and other inflammatory mediators that LPS or ischemia/reperfusion normally triggers, decreasing cellular damage and subsequent tissue or organ injury. Treatment with H2 has been shown to decrease levels of numerous proinflammatory cytokines, including interleukin-1 beta (IL-1β), IL-6, and tumor necrosis factor alpha (TNFα).[24,25] In ischemia/reperfusion injury, protective effects have been demonstrated in the liver,[26] kidneys,[27] heart,[28] brain,[29] lungs,[30] intestines,[31] and even the testes.[32] Positive findings from these and other studies have led to substantial research investigating the use of H2 to improve survival of tissue grafts and organ transplants.[33]

In addition to the antioxidant and anti-inflammatory effects, H2 acts as a signaling molecule and mediates activation of c-Jun N-terminal kinase (JNK),[34] a regulator of apoptosis and the cell response to stress;[35] nuclear factor-kappa B (NF-κB),[36] a regulator of genes that control the immune system response, inflammation, and processes that lead to cancer;[37] vascular endothelial growth factor (VEGF)–induced angiogenesis;[38] and numerous other signaling pathways;[39] each of which may contribute to effects seen with H2 treatment in a diverse array of pathologies.

Sources of Hydrogen for Therapeutic Application

In human studies, H2 has been administered as an inhaled gas,[40] dissolved in water for oral delivery or topical application,[41,42] and delivered in saline intravenously.[43] The amount of H2 delivered is quite variable, and depends in part upon the method via which it is produced. Various commercial ionizing machines are available that produce H2-rich water,[44] and at most, they are able to saturate the water with H2, providing 1.6 ppm or 1.6 mg/L. This compares to the H2 concentration of tap water, which is a mere 8.7 × 10-7 ppm.[45]

In many studies, H2 is produced by the reaction of a metallic magnesium stick or tablet with water: Mg + 2H2O → H2 (g) + Mg(OH)2.[46,47] The release of H2 can easily be seen by bubbles that form in the water. By using additional agents such as malic and tartaric acid to neutralize the magnesium hydroxide and catalyze the reaction rate, it is possible to supersaturate the water with H2, achieving a concentration of nearly 10 ppm.[48] The half-life of H2 in saturated water (often termed H2-rich water) is approximately two hours; however, in a supersaturated solution, H2 will leave the solution much more rapidly (similar to air leaving a highly pressured bike tire) until the saturation concentration is reached, and then dissipates at the typical rate (t1/2 = 2 hours) until equilibrium is achieved with the environment.

H2-rich wateris not pH-altered water (although it may have an altered pH due to other reasons) and carries no claims of containing microclustered or organized water molecules (a means by which ionization or other homeopathic and energetic applications are often asserted to alter the form of water).[49] Although the hydrogen ion (H+) is responsible for changing the pH of water, H2 is a neutral molecule that does not alter the pH of water. As alkaline ionized water (much different from water that is simply alkaline) is produced by the removal of H+ ions, it will not only be alkaline but also contains H2. Studies suggest the presence of H2 may be the reason beneficial effects have been seen with consumption of alkaline ionized water,[50,51] other than general benefits that increased water consumption delivers.

Because H2 is produced to some extent by the bacteria present in the digestive tract (although amounts are variable),[52] our bodies are routinely exposed to it. Numerous studies using considerably higher doses than H2-rich water provides have shown that H2 has a very high safety profile and is not cytotoxic, even at very high concentrations.[53,54,55] Because excess H2 is rapidly expired via respiration, overdosing is not possible. That said, based on the mechanisms and studies thus far, one should not anticipate that higher doses will result in an improved therapeutic response. In one isolated setting, hypoglycemic episodes were reported in an insulin-dependent patient with mitochondrial myopathy and were resolved by reducing the insulin dose.[56] Other than this, a side effect that can occur is loose stools or increased bowel movement frequency. Human studies with H2-rich water have not been performed in pediatric or pregnant populations; however, animal studies in these groups have shown protective effects against disease and toxin exposure,[57,58,59] including to the fetus in utero.[60,61] Safety concerns with flammability do not exist with H2-rich water because the amount of H2 in saturated or even supersaturated water is far below the flammability threshold.

The information contained herein is only a backdrop for future posts in which we will take a closer look at the clinical research that exists using H2 as a therapy. Stay tuned for upcoming posts in which we look at the research behind H2 in settings including autoimmune disease, cancer, neurodegenerative disease, metabolic syndrome, and for performance enhancement.